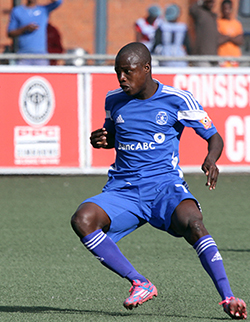 DYNAMOS midfielder Ronald Chitiyo believes his side has a good chance of upsetting PSL leaders Chicken Inn in Sunday’s crucial league visit to Barbourfields Stadium.
The Harare giants arrive in Bulawayo in dire need of maximum points to breathe life into their complicated league title chase.
They are seven points below Chicken Inn while positioned at number three on the log.
Having clobbered hapless WhaWha 5-1 in their last league game, Dynamos went on to beat FC Platinum on penalties in last weekend’s Chibuku Super Cup quarter-final match.
Chitiyo believes the two victories have turned them into a mode which had made them more determined.
“There is a lot of confidence in camp. The last two matches gave us confidence and everyone believes we can beat anyone,” Chitiyo said.
“We are playing against the leaders and such games motivate us. This is the time where we have to show the world that we are Dynamos. Such situations make us strong.
“We are really determined to win the league title and we cannot let it slip through our hands just like that.
“If we beat Chicken Inn we would have reduced the gap between them and us and it will boost our chances of league glory.”
Dynamos are in chase of a fifth straight league title while their opponents are seeking their first ever championship crown.
FIXTURES
Saturday: Tsholotsho vs FC Platinum (White City), Flame Lily vs ZPC Kariba, (1pm, Rufaro), Harare City vs Triangle 3pm, Rufaro), Chapungu vs Buffaloes (Ascot)
Sunday: Caps United vs Highlanders (NSS), Chicken Inn vs Dynamos (Barbourfields), Dongo vs Hwange (Vhengere), Whawha vs How Mine