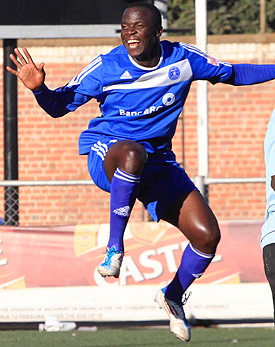 DYNAMOS strikers Roderick Mutuma and Takesure Chinyama have been found guilty of violent conduct towards referee Philani Ncube during their Chibuku Super Cup final against Harare City at the National Sports Stadium on October 31 by the Premier Soccer League (PSL) disciplinary committee.
The Dynamos duo was summoned to a disciplinary hearing on November 17 to answer to charges for the violent conduct.
Dynamos coach, Tonderai Ndiraya expressed disappointment at the ruling.
“I’m worried, to be quite honest, by the disciplinary issues, but there is also a big question that needs to be answered,” he said.
“Are they the only players who were on the wrong side of the law this season? It looks like the law is being applied selectively.
“The Steven Alimenda one was deserved, but I think Roderick and Chinyama have been hard done by the ruling.”
Ndiraya said there were some matches where players behaved in the same manner, but got away with it because the games were not televised.
“It’s unfortunate the game in question was on television, but I remember seeing newspaper pictures of Highlanders players mobbing the referee,” he said.
“Was that not aggression? I think the playing field is not level. I call upon the authorities to apply the law fairly.
“As the coach, I’m not happy by how the law is being applied. I hope going into the future it will be corrected,” he said.
Although the PSL is yet to release the full judgment, it was revealed during the selection of the soccer stars in Harare yesterday that the duo had been found guilty and that they were not eligible to be selected.Advertisement