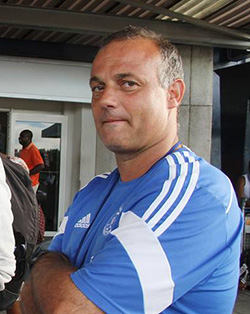 DYNAMOS president Keni Mubaiwa says coach Jorge Paulo Silva is free to fire his assistant Gift Muzadzi who is the team’s goalkeeper’s coach following a fall out between the two.
The team management is expected to meet on Wednesday to iron out differences between the two.
Mubaiwa said on Tuesday: “We have realised the problem is that the head coach did not choose his own assistants as the case should be.
“We hear he says he is being sabotaged, so when results don’t come it is the coach who takes responsibility.
“We are therefore saying the coach should work with the assistants he trusts. He should choose his own assistants he feels comfortable working with.
“We are meeting on Wednesday to look into the problem but if the coach says he doesn’t want to work with one of the coaches be it Muzadzi or Lloyd we will simply fire that coach.”
The Portuguese mentor has made sensational claims that he is being sabotaged by members of his backroom staff, particularly citing Muzadzi.
Sabotage accusations
For his part, Muzadzi also claimed in Tuesday that Silva appears to have a low opinion of black coaches and believes they either know nothing, or very little at all, and cannot be trusted as partners who can help him achieve success.
This followed disturbances at Rufaro on Saturday after Dynamos were held to a goalless draw by Triangle, with fans baying for Muzadzi’s head.
The goalkeeper’s coach believes Silva is trying to put him on a collision course with the supporters by suggesting, at every turn, that he was one of the people sabotaging the club.
Muzadzi said his working relationship with Silva was strained and accused the Portuguese gaffer of fanning divisions in the technical set-up, lacking respect for his workmates, and believing “he knows it all”.
He also questioned Silva’s commitment to stay at the club for a long time after revealing that the Portuguese coach bragged that if the club’s leaders fire him he will pocket a cool $50,000.
Muzadzi, however said he would never sabotage Dynamos, a club he has served with distinction, including being part of the team that reached the final of the 1998 CAF Champions League, and is hurt by claims that he is part of a cartel working to ensure that Silva doesn’t succeed.
He believes the Portuguese coach should concentrate on his job, rather than chasing shadows and picking senseless fights with people he believes are sabotaging him, so that there is unity of purpose at the Glamour Boys.