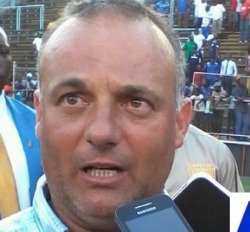 NEW Dynamos coach Paulo Silva was involved in a heated exchange of words and nearly came to blows with goalkeepers’ coach Gift Muzadzi over the selection of goalkeepers before their friendly match against WhaWha at Rufaro Stadium on Sunday.
According to witnesses, Dynamos secretary Webster Chikengezha’s intervention prevented the situation from getting out of hand.
But the Portuguese coach reportedly insisted that Muzadzi had to leave for them to go ahead and play the match.
Muzadzi did not sit on the technical bench as the former champions walloped
Whawha 4- 0 in a match they dominated and in which they exhibited their shooting prowess.
But Rodreck Mutuma, who was in excellent form and scored one of the goals, was the major talking point after the match as he botched a penalty late in the second half.
Walter Mukanga was brought down in the penalty area as he charged for goal and the referee awarded Dynamos a penalty.
Mutuma stepped forward to take the responsibility. He then squared the ball for Valentine Ndaba but an alert Wha Wha defender beat Ndaba to the ball and cleared it to safety to deny what could have been Dynamos’ fifth goal of the match.
Despite the penalty boob, Dynamos gave their fans a glimpse of what to expect in the coming season as they displayed flair and good finishing.
Mukanga sent Dynamos into the lead in the first half with a brilliant header before Farai Mupasiri added the second. Mutuma then made it 3-0 with a brilliant finish, beating the goalkeeper before slotting the ball into the net.
Utility player, Godknows Murwira, then wrapped up the contest with a fierce shot that beat the goalkeeper to make it 4-0.
The Portuguese coach, however, refused to speak to reporters after the match, accusing them of writing what he said was rubbish.Advertisement