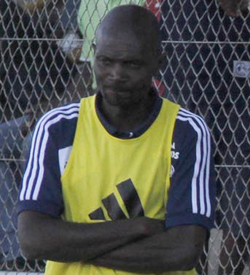 Dynamos 1-0 CA Birzetin
(Dynamos lose 3-1 on aggregate)
THE curse of North Africa returned to haunt Dynamos again on Sunday as they bowed out of the Champions League despite beating CA Bizertin 1-0 in a second round, second leg tie at Rufaro.
Cliff Sekete scored in the last minute to secure a narrow win – but as in the previous two seasons, the damage had already been done away in Tunisia.
Dynamos could face further punishment from the Confederation of African Football after missiles were thrown onto the pitch by despondent fans from the Vietnam stand 20 minutes from the end.
Dynamos skipper Murape Murape had promised an avalanche of goals on Friday to overturn a 3-0 deficit from the first leg, but he could not even complete the game himself, hobbling off after 76 minutes to be replaced by Russel Madamombe.
The substitute tried some long efforts together with Tichaona Mabvura, but it was clear Birzetin would try every trick to frustrate the hosts from offside traps, time-wasting to feigning injury at any given opportunity.
In the last two outings against North African opposition, Dynamos have always come second best. In 2011, they beat MC Alger of Algeria 4-1 at Rufaro, but crumbled 3-0 away to bow out.
Last season, they drew 1-1 with eventual African champions Esperance of Tunisia but were humiliated 6-0 in the return leg.
The latest setback is a major disappointment for coach Callisto Pasuwa, who has also seen Dynamos make a slow start to the new season with two draws.
In his post match interview, Pasuwa admitted: “We did all we could in midfield and created all the chances but the finishing in the final third was poor. We missed a lot of chances. Lack of depth was also another issue.
“The long range shots we tried also did not help. We should have scored in the first half and put the pressure on them.

“Now have to regroup and focus on the next match. There is no time to rest; we play Shabanie midweek.”

Farai Mupasiri and Sekete started upfront hut the pairing failed to yield any results.
Ocean Mushure tried to help the attackers with some overlapping runs to no avail and by the half hour mark, it was clear Dynamos had been frustrated.
The second half passed in a similar pattern with the Dynamos players failing to create a clear opening.

The Tunisians on the other hand held on to the ball and let Dynamos chase it until Sekete nicked the winner at the end.