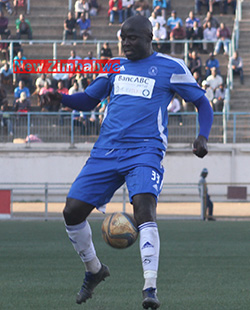 Dynamos 5-1 WhaWha
Hwange 0-1 CAPS United
DYNAMOS reacted to last Saturday’s defeat at FC Platinum with an emphatic first half display that saw them hammer visiting WhaWha 5-1 at Rufaro Stadium on Wednesday.
Coach Tonderayi Ndiraya was impressed with his side’s showing.
“Five-one it is but we only got three points. I wish we could get more points by scoring more goals. All the same it is good for the boys, it’s good for the team to score goals,” he said after the game.
“I think this was our first game this season to score as many goals. The three points will keep us up there with the rest, we will maintain our position.
“We will keep working hard and then we will see where we will be at the end of the season.”
He added: “I thought we created lots of chances especially in the first half.
“We could have gone to the break with, maybe 10. First five minutes, I think we created two good chances which we fluffed but at the end of the day I am impressed by the result and by the goals we scored although I thought we could have done more.”
WhaWha coach Lloyd Mutasa said his side got what they deserved.
“I think it was one of the worst games we have ever played in the Premier League,” he said.
“It’s a game probably the youngsters gave away in the first 20 minutes. When you concede four goals against the defending champions in the first 20 minutes then you are out of it.”
Survival in the top flight with 19 points and seven games remaining is now a huge challenge, Mutasa admitted.
“We have put ourselves in a tight corner and probably we just have to try and make up for it by winning games. But like I said before the destiny is no longer in our hands,” he said.
“So we have to look at ourselves and then look at how other teams are performing.”
After the loss to FC Platinum dented their title chances, Ndiraya’s men came back in serious mode as Takesure Chinyama grabbed a brace while Ocean Mushure, Ronald Chitiyo and Godknows Murwira weighed in, all in the opening half to hand Dynamos the big win.
Nelson Maziwisa grabbed WhaWha’s consolation goal which also came in the first half.
Despite recording their biggest win of the season, Dynamos however remain on position three on the log with seven points off leaders Chicken Inn.Advertisement

Mushure, who was returning from a two-game suspension, thrust Dynamos ahead on 11 minutes with a well-struck powerful and low shot off a corner kick.
Six minutes later Chitiyo rifled home to highlight Dynamos’ seriousness before Chinyama made it three two minutes later.
Chinyama struck again in what appeared to be an own goal by WhaWha a minute later as Dynamos completed a 10-minute goal craze marked with four goals.
Nelson Maziwisa tried to get WhaWha back into the game on 33 minutes but Murwira cemented victory for Dynamos three minutes later.
In terms of goals, the second half was a far cry from the opening stanza which produced six strikes but Dynamos had already done their job.
In other games, struggling CAPS United grabbed three points at Hwange after edging the home side 1-0 through a Dominic Chungwa strike.
Wednesday Results: Triangle 1-2 Chicken Inn, How Mine 0-3 FC Platinum, Dynamos 5-1 Whawha, Hwange 0-1 Caps United, Chapungu 2-1 Tsholotsho
Thursday fixtures: Highlanders vs Flame Lily (Barbourfields), Buffaloes vs Dongo Sawmill (Sakubva)