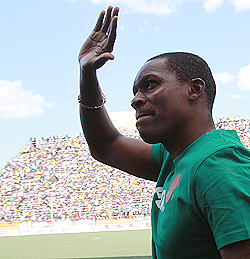 ZIMBABWE champions Dynamos have plunged in world and continental football club ranking with the latest information from European-based FootballDatabase revealing that they are now outside the top 10 in Africa.
According to the football site, the rankings are based on the Elo rating system with points tallied from all the games throughout the year, including league and cup matches.
It was updated after games played on October 4 this season.
The Glamour Boys who chose not to take part in the African Champions League despite winning the league for the fourth successive season last term dropped down the ladder to sit on 14th place in Africa and 240 in the world.
TP Mazembe of the Democratic Republic of Congo who have reached the final of the African Champions League after overcoming  Al Merrikh of Sudan 3-0 to qualify on a 4-2  aggregate victory and will face USM Alger, are ranked the best African club.
AS Vita- also from the DRC-are ranked second with Al Merrek of Sudan in third while Kaizer Chiefs are in fourth place.
South Africa also has Mamelodi Sundowns in 12th place.
Last season, Dynamos were among the top 10 teams in Africa sitting on 10th position with Kaizer Chiefs being the only team from Southern Africa ranked higher than them.
It appears the decision by the club hierarchy not to enter the team in the African Champions League after they lifted their fourth straight championship have had a negative effect on their ranking.
The defending champions also had a sluggish start to the championship race and are in third place with 46 points behind leaders Chicken Inn who have 52 points and second placed FC Platinum on 48 points with five matches left in the campaign.
Notwithstanding this, Dynamos are ranked stronger than some clubs in Europe including Spanish clubs Getafe and Valladolid and English teams Hull City and Birmingham City, Cagliari from Italy and Germany side Hannover 96 among other clubs.
FC Platinum who participated in the Caf Confederation Cup this season and are second in the championship race are placed on position 34 in Africa and 462 in the world with Bulawayo giants Highlanders on position 35 in Africa and 501 in the world.
Caps United are ranked 43 in Africa and 558 in the world. Chicken Inn are a distant 54 in Africa and 633 in the world.Advertisement

It almost seems crazy that Highlanders for all their struggles this season could be ranked higher than Caps United or log leaders Chicken Inn but it must remembered that points are tallied from all their games throughout the year, including league and cup matches.