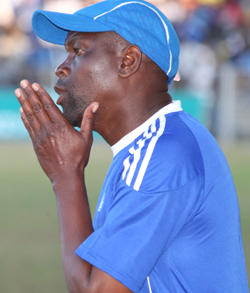 TWO second half strikes from Godknows Muriwira and Kudzanai Nyakasaka earned Dynamos the maximum home points against Border Strikers in a Zimbabwe premier league match played at Rufaro stadium in Mbare, Harare on Sunday.
This was Dynamos fifth victory following a dismissal earlier start of the season.
An opening goal-less 45 minutes ignited a bright start to the second stanza of the game.
Chipunza hit the woodwork, Masimba Mambare had an attempt saved by goalie Talent Sunday as the home side sought to create an early difference.
A decent free-kick from Murwira after 65 minutes broke the dead-lock.
With five minutes to the end of the game, the visitors had a penalty shout turned down when William Nyoni was illegally felled into the area.
Nyakasaka won it late for Dembare after being set up by Musa Madhiri.
Dynamos climb to fourth on the team log.
Elsewhere, Hwange lost 1-0 at their Colliery home to visiting Bulawayo City.
Stephen Ndlovu scored the lone strike on the day.Advertisement