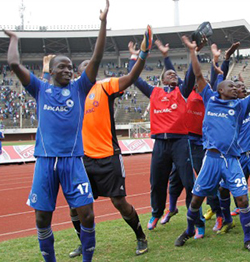 Dynamos 2-0 Highlanders
THIS now looks a tired script!
In fact the organisers of the Bob90 Super Cup, by giving Dynamos a bye into the final, would have wanted things to go this way as the Harare giants again beat Highlanders to lift the cup at Rufaro Stadium on Sunday.
For their efforts, the Harare side walked away with $45,000 – a far cry from the $100,000 for winning last year’s competition, while Highlanders took home $25,000 way down from the $70,000 they earned for coming second last term.
Harare City, beaten by Highlanders in the elimination match got $10,000.
Masimba Mambare scored against his former side when Clive Kawinga beat Felix Chindungwe to the ball and found the Warriors man. He made no mistake in beating the advancing Highlanders goalkeeper Munyaradzi Diya in the 31st minute.
Ronald Chitiyo then lobbed Diya five minutes after the break to make it 2-0. Chitiyo thought he had made it three ten minutes later, but was flagged for offside.
At the other end, Highlanders were denied a clear penalty when Milton Ncube was hacked from behind when going for the kill. But apart from that, the Bulawayo giants never really rose to the occasion on this day.
Kuda Mahachi had some mazy runs early in the first half but soon fizzled out while new signing Chindungwe was also jittery at the back with some dangerous back-passes and had Dynamos strikers been alert, they could have scored more.
For Dynamos, this was a much-needed boost after bowing out the Caf Champions League last week at the hands of AS Vita of the DRC.
It also gives under pressure coach Callisto Pasuwa some breathing space following last week’s reports that former coach David Mandigora was angling for that post after their exit from the Champions League.
Mandigora is the current vice chairman and was helping Dynamos in training in January when Pasuwa was with the Warriors at the Chan finals in South Africa.
Whether this win will ensure Pasuwa stays for the rest of the season remains to be seen.Advertisement