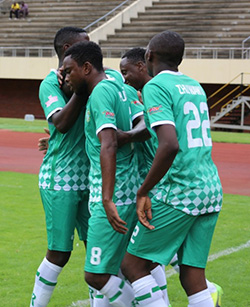 HARARE giants Dynamos staged a dramatic come-back to edge a spirited Bulawayo City 4-3 in a Castle Lager premiership tie at the National Sports Stadium on Sunday.
The win, their fifth in succession, saw the Glamour Boys leaping to fourth position on the league table with 26 points from 13 matches.
Although their defence leaked like a sieve, ultimately, they ran away victors. Missing their skipper, Ocean Mushure, who is away on national duty, Dynamos found themselves trailing on seven minutes.
This was after goalkeeper, Tonderai Mateyaunga, made a mess of a back pass, unnecessarily choosing to dribble instead of clearing the ball out of danger, and an alert 18-year-old Clive Rupiya – the stand out performer for the visitors who went on to score a brace – dispossessed him before slotting into an empty net.
However, the Glamour Boys, showing considerable verve, levelled matters three minutes later, Obey Mwerahari – the captain for the day – got to the end of a free-kick by Peace Makaha, lept highest to plant a firm header into the nets.
Denver Mukamba then popped up with the second after eight minutes, toe-poking the ball home from a throw-in by Carlos Rusere.
Still, the visitors matched their more illustrious opponents blow-by-blow with Kelvin Madzingere and Mkhokeli Dube coming close on 36 and 38 minutes respectively.
They were duly rewarded in the second half, Rupiya completing his double on 47 minutes with the Dynamos defence guilty of ball-watching.
However, Cameroonian, Christian Epoupa made it 3-0 on 52 minutes, using his big body to shield the ball from his marker after a set up by Peace Makaha before unleashing a thunderous shot that hit the roof of the nets from the acutest of angles. It was his fifth-goal of the campaign, a goal rarely seen in the local game.
Defender Lincoln Zvasiya then added the fourth on 71 minutes, drilling a low shot that beat the keeper after a set up by Mukamba.
However, Bulawayo City continued to pile on the pressure and it was 4-3 on 82 minutes; substitute Bellington, who came in for Hamphrey Ncube heading the ball into the nets.
Dynamos assistant coach Biggie Zuze was happy with his team’s performance.
“We are very happy with our performance. It was a good game, balanced match and one of the best this year, a seven-goal thriller,” he said.Advertisement

“Credit to the boys. They kept on fighting, but we didn’t defend well. The first goal was a gift from the keeper. But this happens in football.
“We will continue to correct the mistakes but we are beginning to see a change in the team. The fighting spirit is there and these guys deserve to be where they are right now.”
His counter-part Mandla Mpofu praised his charges for a good show.
“It was said from some quarters that this was an easy assignment for Dynamos but I guess this was unbelievable performance from guys,” said Mpofu.
“We conceded one stupid goal which could have been avoided but, overall, it was a good performance from my guys.
“I am blending youth and experience and it’s coming up; two goals from 18-year-old Rupiya whom I believe is the next Khama.
“Our target is to avoid relegation and I am very pleased with this performance.”
WEEKEND RESULTS:
Dynamos 4-3 Bulawayo City, How Mine 0-0 Highlanders, Black Rhinos 1-2 Harare City, Triangle 1-0 ZPC Kariba, Hwange 1-0 Shabanie, Bantu Rovers 0-0 Chapungu