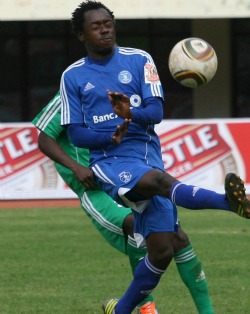 Caps United 0-1 Dynamos
Highlanders 1-2 How Mine
DYNAMOS edged the Harare derby Sunday through penalty in an otherwise dismal Castle Lager Premiership match at the National Sports Stadium while rivals Highlanders fell 1-2 at home to to How Mine.
Devon Chafa stepped up to convert from the spot in the 24th minute after former Caps striker Clive Kawinga was hacked from behind.
However apart from the goal and four yellow cards, the derby failed to live-up to expectations and, mirroring the cold weather, pattered into an emotion-less encounter, punctuated by sporadic attacks, crude fouls and the lone goal.
Caps United started on the offensive with Tawanda Nyamandwe proving a handful for Patson Jaure and the rest of the Dynamos back-line, but his efforts at goal in the third and 8th minute were smothered by George Chigova in goal for DeMbare.
And, with Caps defenders keeping Washington Pakamisa at bay, DeMbare fans looked to it was left to Clive Kawinga to try and lead the line, but the striker looked like he would rather be spending his Sunday afternoon somewhere else.
Veteran Murape Murape was also a virtual passenger in the opening half, leaving Tawanda Muparati working overtime to cover for his skipper.
Dynamos had their first sniff at goal in the ninth minute when Thomas Magorimbo chested the ball down outside the box but could not find his best footing as he tried to shoot at goal. Caps immediately went into the offensive, but also to no avail.
Instead, four yellow cards were flashed in a space of eight minutes to the Caps pair of Rahman Kutsanzira and Tawanda Munyanduri while Dynamos’ Ocean Mushure and Morris Kadzola also went into the referee’s book as the game threatened to slow to a standstill.
But Dynamos raced ahead in the 24th minute when Munyanduri hacked down Kawinga inside the box and the referee awarded a spot-kick. Chafa had no problem blasting past Caps United goalkeeper Tafadzwa Dube.
Kawinga finally made way for Boban Bogere in the 65th minute as Caps literally camped in the Dynamos half in search of an equaliser.
The Ugandan international’s introduction appeared to sway the game in favour of Dynamos as they took control the midfield, but the final pass was always missing with Pakamisa under lock and key and completely missing in action when it mattered most.Advertisement

Nyamandwe could have drawn level for Caps in the 76th minute in front of a yawning goal but mis-kicked his effort. And seven minutes from time, Nyamandwe had to make way for Leonard Fiyado as that elusive leveller failed to come.
Meanwhile, at Barbourfields, Highlanders went ahead through an own goal from Hebert Dick in the 14th minute after he deflected a shot from Beaven Chikaka past his own keeper. But Dick made amends in the 44th minute heading home from a corner.
Nqobile Mpala then settled matters in the 83rd minute, beating Munyaradzi Diya at close range to hand Highlanders their second defeat of the season at home.
In other matches, Black Mambas stunned Buffaloes 2-1 at Sakubva, while Hwange chalked up their second win of the season in 10 matches when they dispatched Tripple B 3-1 at the Colliery.
FC Platinum maintained their one point lead at the top over Highlanders, Harare City and How Mine after a 1-1 draw with Monomotapa at Rufaro on Saturday while Chicken Inn stunned Black Rhinos 1-0 at Gwanzura.
Motor Action welcomed back Joey Antipas back from a Danish coaching attachment with a 2-1 win over Shabanie Mine at Motor Action Sports Club.
Shabanie coach Luke Masomere again crossed swords with his team management accusing them of failing to plan for the game after they were made to travel 400km from Zvishavane to Harare on match day.
Premiership results
Saturday: Monomotapa 1-1 FC Platinum (Rufaro), Motor Action 2-1 Shabanie Mine (Motor Action Sports Club)
Sunday: Dynamos 1-0 Caps United (National Sports Stadium), Highlanders 1-2 How Mine (Barbourfields), Buffaloes 1-2 Black Mambas (Sakubva), Black Rhinos 0-1 Chicken Inn (Gwanzura), Hwange 3-1 Tripple B (Colliery)