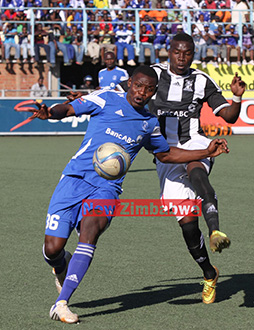 DYNAMOS smothered Highlanders 3-2 in an exhilarating Castle Lager Premiership match at Rufaro on Sunday to maintain their dominance over the Bulawayo giants.
The visitors went into the match seeking to beat Dynamos for the first time in a league match since 2006 but a first half brace by Ronald Chitiyo and another goal in the second half by Quadr Amini ensured the home team remain unbeaten by their rivals in almost a decade.
Highlanders started brightly, launching wave after wave of attack at the hosts.
Bosso dully raced into the lead after just six minutes through Knox Mutizwa who converted from the penalty spot after Augustine Mbara brought down Obadiah Tarumbwa in the penalty box and referee Norman Matemera awarded a penalty.
However, Chitiyo levelled after six minutes, chesting the ball down from Dominic Chungwa before beating goalkeeper Ariel Sibanda in goal for Bosso with his left foot.
In the 19th minute, Chitiyo completed his brace, drilling the ball home in a crowded box after Masimba Mambare’s initial attempt through the legs of the keeper was blocked.
Thereafter, frustrated Bosso supporters threw missiles onto the pitch, protesting a decision by the referee which went against them.
Chitiyo also came close 34 minutes later but his speculative shot was saved by the Highlanders keeper.
In the second half, Bosso coach Bongani Mafu made a tactical substitution, pulling off Simon Munawa who had already been booked, throwing in Nqobizitha Masuku.
Barely a minute after the substitution, Mutizwa completed his brace with a superb header from a free kick by Edmore Muzanenhamo to level matters.
But as Highlanders were in control, Quadr Amin, returning from an injury thrust Dynamos ahead, planting a firm header into the nets on 73 minutes.
The visitors though maintained their dominance and, on 78 minutes, Edmore Muzanenhamo had the ball in the back of the nets but the referee ruled it offside.
Mafu expressed his disappointment at the final whistle.
“It’s a game we should have won,” said the coach, clearly dejected.
“We played well; we dominated but we couldn’t hold on to the win. There is lack of maturity when you lead and fail to hold onto the win.
“Our team needs a win. We need to finish off games and this result is not good for ourselves. It’s not good for our supporters.Advertisement