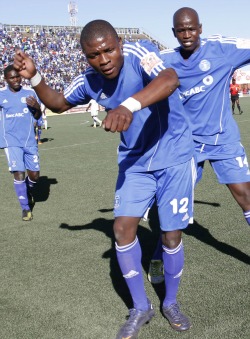 DYNAMOS on Sunday beat arch rivals Caps United 2-1 for the second time in a month to progress to the ZNA Charity Shield at Rufaro.
It was the club’s third meeting this month.
Caps United won the first meeting when they lifted the Sino-Zim Cement Challenge Cup before they were beaten 1-0 in the Bob 91 Super Cup final two weeks ago.
Dynamos will now meet Bulawayo giants Highlanders who edged How Mine 1-0 in another semi-final clash at Barbourfields Stadium.
Caps United coach Mark Harrison threw on a number of youngsters for the tie.
Dynamos dominated the match in the first half in which Caps United struggled for fluency, with most of their passes going astray.
They fell behind after just five minutes courtesy of Patrick Khumbula who bundled the ball into the net to beat goalkeeper Itai Chiwara after profiting from a pass by Qadr Amini
The goal dampened Caps United spirits allowing Dynamos to double their lead on 15 minutes through Ghanian midfielder Erick Opoku.
Caps United though refused to be cowed into submission as they regained confidence and threatened with some fine raids.
They were rewarded on 31 minutes through former Highlanders midfielder Hillary Madzivanyika who scrambled the ball home in a goal mouth melee following a corner kick by Tinotenda Muskwe.
After the goal, United launched raid after raid. But they were fortunate not to concede a third goal on 44 minutes with Carlos Rusere coming close only for his effort to smash against the upright.
They had a chance to draw parity in the second half but Kudzai Nyamupfukudza missed a sitter after 49 minutes.
Dynamos coach David Mandigora was delighted with the victory.
“It’s a very important victory to us psychologically. It gives confidence to the players. It was a good performance and I think we are ready to start the season,” said Mandigora.
Caps coach Mark Harrison however said the tie was more of an exhibition game to assess some of their players.
“To us this was more of an exhibition match to expose some of our players to a hostile environment,” he said.
“We had a list of injured players Moses Muchenje, Gerald Phiri and others so we had an opportunity to assess the youngsters.
“It was not really serious match but we will be more serious at the weekend when we start the league games.”Advertisement