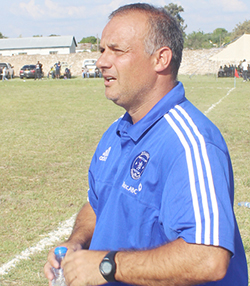 DYNAMOS have taken their pre-season preparations to Malawi and Tanzania as new Portuguese coach Paulo Jorge Silva looks to build a squad that can win the championship this term after they were agonisingly beaten to it by Chicken Inn last season.
They are set to leave for Malawi on Thursday where they will play Big Bullets in two international friendly matches over the weekend before making another trip to Tanzania for a date with Young Africans two weeks later.
The PSL have said the season will kick off on April 2 after the Warriors’ international assignments.
Dynamos were beaten 1-0 by ZPC Kariba to bow out of the Zimbabwe National Army Charity Shield at Rufaro on Sunday.
It was their first defeat in the preparatory campaign, having overcome Zambia’s Kabwe Warriors 2-0 in one of their international friendly matches.
Silva though says the ZPC Kariba defeat has been an eye opener. He challenged his players to work hard and score goals as they step up their preparations for the new season.
“We are still in pre-season but the match against ZPC Kariba was an eye opener. There is still a lot of work to be done,” he said.
“We need to improve on scoring in particular. ZPC scored one goal but we couldn’t score a goal, that is not acceptable. We need to start scoring,” said Silva.
National Under-23 captain Wisdom Mutasa scored the solitary goal for Kariba straight from a corner kick.
Interestingly, Mutasa had been a target of DeMbare but they were beaten to his signature by ZPC Kariba who are now under the guidance of Sunday Chidzambwa.Advertisement