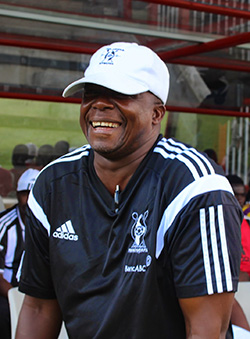 PREMIER Soccer League (PSL) action returns this weekend with the clash between defending champions Dynamos and bitter rivals Highlanders arguably the high profile fixture this weekend.
The two teams square off at Rufaro on Sunday in one of two matches to be screened live on Supersport after a month’s blackout. The other match between Caps United and Harare City on Saturday will also screened live.
Defending champions Dynamos are hard pressed to win the encounter having drawn their last three matches against (Tsholotsho 0-0), (Triangle 1-1), (ZPC Kariba 1-1).
But the return of Simba Nhivi, Quadr Amini and Obey Mwerahari from injury appears to have given them confidence.
Team manager Richard Chihoro confirmed the players are back at training.
“We have all our players who were injured back in training,” said Chihoro.
“Players like Simba Nhivi, Quadr Amin and Obey Mwerahari are all training with the rest of the team and are available for selection for the match against Highlanders.
“It’s a boost for us because matches against Highlanders are always difficult. It’s like you are playing against Caps United and you always need all your players for these matches.”
Dynamos, Chihoro said, have been training during the two-week break and, at the same time, also allowing players time to rest.
While CAPS United featured in a friendly match in Mozambique against Chingale de Tete, which they won 2-1 with FC Platinum drawing 1-1 with TP Mazembe in the Democratic Republic of Congo, Dynamos have not been involved in any friendly match during the break.
Chihoro however, insists they are in good shape and will be up for it against Highlanders.
“We have been training but at the same time allowing players time to rest. We have not played in any friendly match but we are in very good shape.
“We are ready to face Highlanders. We know it will not be easy although we have been getting the better of them in recent matches. But the guys are ready for this match,” said Chihoro.
Dynamos are in third place on the table with 23 points six behind log leaders Chicken Inn and one behind second placed Triangle after 13 rounds of matches.
A win over Highlanders will help them keep pressure on the leaders as the Glamour Boys seek to win their fifth successive championship.Advertisement