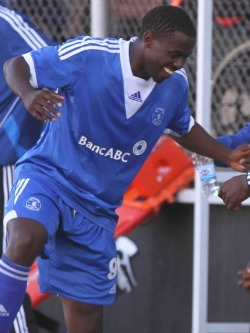 Dynamos 2-0 How Mine
BLESSINGMoyo and Washington Pakamisa scored in each half as Dynamos beat How Mine to reach the final of the One Wallet Cup at Mandava Stadium on Sunday.
They will play Triangle who beat Chicken Inn 5-3 after penalty shootouts after the game had ended 0-0 after regulation time.
After a rather quite start to the second semi-final, Moyo connected the ball just outside the box and let fly stunning shot that left How Mine veteran goalkeeper Ephraim Mazarura clutching thin air in the 18th minute.
In the second half, How Mine tried to come back into the match, but Devon Chafa and Tafadzwa Rusike kept them backpedalling.
In one such move in the 55th minute, Ronald Chitiyo got to the end of a Chafa ball, beat his marker but fell under challenge from Gilbert Banda. The referee adjudged that he had dived and booked him, leading to a barrage of complaints from Dynamos team manager Richard Chihoro.
Chihoro was subsequently sent off for remonstrating with the fourth official.
Three minutes, there was not denying Dynamos the cushion goal as Pakamisa finished off a cool move to slot past Mazarura.
On Saturday, at the same venue, Brian Mbiriri missed for the GameCocks to hand Triangle passage into the final.
It was Triangle’s second penalty shoot-out victory in this tournament after they knocked out Harare City 7-6 in the quarter finals at the same venue in the first round.
Triangle coach Biggie Zuze said the victory will light up their season.
“It is good that we have won and I am hopeful that this will have a positive impact on our season. We could have won the match inside regulation time but we missed glorious chances that came our way. But the good thing is that we are in the final. We are ready for any opponent.”
His opposite number Joey Antipas said they were their own enemies.
“We blew it for ourselves. We had a good opportunity to win the match in regulation time but unfortunately the boys had to settle for a draw and you know a penalty shootout is a lottery which is unpredictable.”