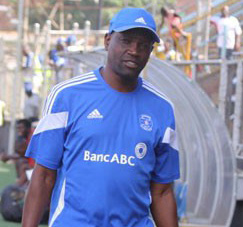 DYNAMOS have finally sacked Portuguese coach Paulo Jorge Silva after he failed to reverse the club’s indifferent start to the season.
The development followed a meeting by the club leadership on Thursday night.
Silva has since been replaced by his assistant Lloyd Mutasa.
Informed club sources also revealed last night that former Dynamos captain, Murape Murape, and Clayton Munemo, also a DeMbare son, have been roped in as assistant coaches.
Goalkeepers coach Gift Umbro Muzadzi, who had been suspended following his public fall out with the Portuguese, had his suspension lifted and also joins the new technical team.
The latest development means  Mutasa will lead the team in a block-buster Castle Lager Premier Soccer League tie against Norman Mapeza’s FC Platinum at Rufaro on Sunday.
Silva had been given a target of nine points from  three matches against newly promoted Mutare City, Caps United and Hwange.
He managed just four points after overcoming Mutare City 2-1 before being beaten 1-0 with the 0-0 draw to Hwange drawing the ire of the club leadership who called an emergency meeting where it was agreed that Silva be released from his duties.