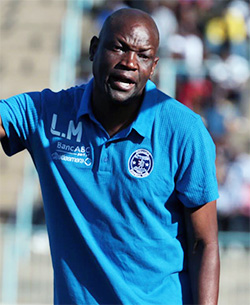 AFTER Dynamos started winning plaudits for a resurgence phase, under coach Lloyd Mutasa a few months ago, they now appear to be losing steam again.
The 2-1 loss away at log anchors Border Strikers saw the Harare giants recording a five-game winless streak, that came on the backdrop of a five-game unbeaten run which had given them high hopes of reclaiming the league title.
Interestingly, the latest run includes four straight goalless draws and pressure is again starting to mount on Mutasa, as they are now 11 points behind leaders FC Platinum.
But club president Kenny Mubaiwa is refusing to let the current tide come as pressure on the team although he said it is now a major cause for concern.
“We are not panicking as the club yet although the recent results are a cause for concern. We believe we could come up with a way to correct things,” Mubaiwa said.
“We would not want the pressure of coaches to come under pressure but at the same time it is important for the to know that they have to act up. We need the results and I hope we will get back to winning ways in the next game.”
Dynamos host Bulawayo City in their next game on Sunday with the hopes of resuscitating their fortunes.