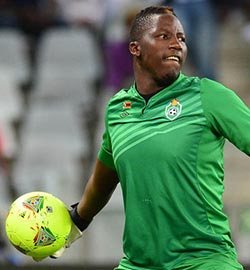 DYNAMOS goalkeeper George Chigova has signed a three-year deal at South Africa Absa Premiership side Supersport United becoming the second Chan star to get a deal abroad.
Exciting attacking midfielder Kuda Mahachi signed a five year deal with Mamelodi Sundowns and was loaned to Highlanders until June.
Chigova will remain at Dynamos until June and is expected to link up with the Pretoria-based side, which also has former Warriors hardman Kaitano Tembo in their juniors technical team, for the 2014-2015 season.
Supersport chief executive Stan Mathews said: “We are fortunate to have a great goalkeeping complement at the club in Ronwen Williams and Boalefa Pule.
“But with Rowen Fernandez likely to leave at the end of the season it was important for us to have fierce competition in every position, including the keepers.
“I am certain that George will push Ronwen and Boalefa all the way and I’m looking forward to seeing a record amount of clean sheets next season.”
The Dynamos leadership and Chigova’s manager Gibson Mahachi have been in denial of the deal in the last two weeks probably because they did not want the financial side of the transaction to be made public.
Chigova becomes the third goalkeeper from Dynamos to move to South Africa after Washington Arubi joined University of Pretoria two seasons ago, while Tendai Tanyanyiwa has been at the same team for the last five years as goalkeepers’ coach.
Advertisement