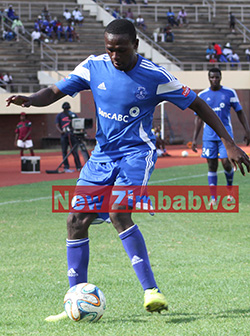 Dynamos 3-0 Buffaloes
DEFENDING champions Dynamos thumped visiting Buffaloes 3-0 at the National Sports Stadium Saturday as they started the new season in ominous fashion.
Strikes by Simba Nhivi (formerly Sithole) and Walter Mukanga as well as an own goal by the Buffaloes wingback saw the champions start the new campaign with the maximum three points.
Dynamos dominated the encounter from the start and duly took the lead in the 11th minute when Nhivi capitalised on defensive confusion among the Buffaloes players to rifle home past goalkeeper Blessing Mwandimutsira.
Eight minutes later Buffaloes defender Kudzai Mwaramba inadvertently helped in a header from Oscar Machapa to double Dynamos’ lead.
The visitors barely threatened Dynamos and the tie was effectively over as a contest with eight minutes remaining when Mukanga slotted home a cross from Nhivi with eight minutes remaining to kill the match as a contest.

Despite the win Dynamos coach, David Mandigora, was not over impressed with his charges.
“We were lucky to score those two early goals before going on to miss a number of chances . . . but it’s normal in football to miss chances,” he said.
“I am, however, happy with the result, but the performance did not please me. We will now have to quickly forget about this game and start focusing on our next match against Chapungu.”
Joseph Takaringofa, who took charge of Buffaloes after Moses Chunga’s resignation, conceded that his side could have applied themselves better.
“I am very disappointed the team never played football today. We gave Dynamos too much respect and this is what you get if you take such a casual approach,” he said.
“Dynamos did not do anything extraordinary, but we literary gave it to them on a silver platter. But we will try to correct our mistakes from our attitude, commitment and tactics.
“We will also have to add five more players to the current squad otherwise we might be heading for difficult times.”