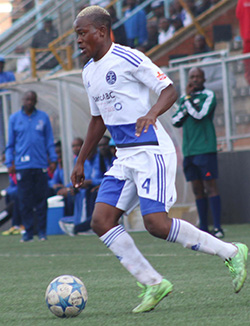 DYNAMOS handed own son Moses Chunga his first defeat as Harare City coach with an efficient display which saw them run 2-0 winners at Rufaro on Saturday.
The win, Dynamos’ third in a row, was inspired by a rejuvenated Masimba Mambare who scored and assisted the other with the other goal.
Youngster Brett Amidu scored the other goal of the match as DeMbare recorded a second consecutive win at Rufaro where they have been struggling to win matches as well as to score goals this season.
After the game, coach Lloyd Mutasa believes his team is gaining in confidence.
“It was evident from the beginning that our shortcoming was failing to score goals and, now that the goals are coming, the team is gaining in confidence,” he said.
Chunga, who had won his first two matches since joining Harare City earlier this month, finally tested defeat.
Given a standing ovation, from the Dynamos faithful, Chunga however blamed his team’s defensive frailty for the defeat.
“We didn’t come to the party,” he said.
“Our defence was sloppy; we conceded a goal at the near post and, for the second goal, we were caught in sixes and seven and failed to clear the ball.”
Dynamos who played as the away side started the match with a youthful attack with Amidu, King Nasama, Kudzi Nyakasaka and Musa Madhiri all getting the nod.
Against the run of play, Dynamos took the lead in the first 10 minutes when Mambare connected with an Ocean Mushure corner to put his team ahead.
Apart from their eye catching passing game, Harare City never created any serious problems for Dynamos.
As City labored with their preferred method of walking the ball into the net, Dynamos were extending the lead in the 24th minute.
Mambare beat his marker on the right and picked out Amidu who slotted home from inside the box.
Thereafter, DeMbare were content to defend with the coach bringing on two defensive midfielders, Stephen Chipunza and Dominic Mukandi to help Stephen Alimenda.
The changes helped Mutasa’s charges successfully defend their two goal cushion.