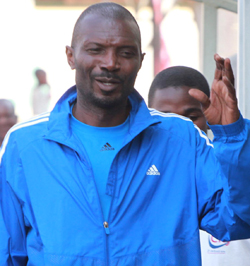 THE Dynamos executive threw their full weight behind coach Kalisto Pasuwa on Monday as the champions went into a soul searching following a shock exit from the lucrative Mbada Diamonds Cup at the hands of lowly How Mine.
Initial reports on Sunday had suggested Pasuwa had been given an ultimatum ahead of the Harare giants meeting with FC Platinum in a Castle Lager Premiership tie at Mandava on Wednesday.
A first half strike by Thembani Masuku was all Philani Ncube’s men needed to advance to the semi-finals of the richest knock out tournament in which winners will take home a staggering US$130,000.
That defeat divided opinion among the supporters with some calling for Pasuwa’s resignation.
A section of the supporters barricaded the main entrance to Rufaro Stadium soon after the match as they demanded for the coach’s resignation and recall of former assistant coach Tonderai Ndiraya.
“Pasuwa should recall Tonderai Ndiraya (former assistant coach who was fired two months ago), or he should just resign,” shouted one of the supporters in the midst of the chaos just
after the match.
“Pasuwa has been heavily exposed and he should just do the honourable thing and resign. He should swallow his pride,” another one bellowed before the police intervened to disperse the crowd as the situation threatened to explode.
However, after a meeting to review the performance of the team on Monday, the Dynamos leadership decided to give Pasuwa another chance.
“Of course it’s disappointing to lose to How Mine and to be out of the richest knock out tournament in the country,” said club chairman Kenny Mubaiwa after the meeting to review the performance of the team.
“We wanted to defend the Mbada Diamonds Cup but these are results to be expected in football. We need to support the coach during this crucial time because we also have the league title to think about.
“It is not the right time to point fingers. We need unity so for now Pasuwa remains in charge of the team. What is important is to focus on the league campaign.”
It was the third meeting between the two clubs after Dynamos defeated How Mine 3-0 in the reverse fixture in Harare before losing 1-0 at Luveve.