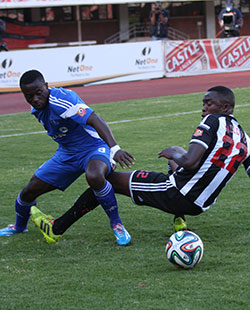 DYNAMOS and Highlanders have been picked to play in a US$110,000 inaugural Challenge Cup one off match sponsored by a local retail group at the National Sports Stadium on September 6.
Winners of the TM, Pick n Pay Challenge Cup will walk away with US$60,000, while the losing team will pocket US$50 000.
The two teams will also receive a branded top-of-the-range Adidas kit, imported from Germany.
In return both Dynamos and Highlanders players and officials will be expected to play some promotional roles for the retail giant in the countdown to the big match.
TM Pick n Pay group finance director Onias Makamba said this could be the start of a long, happy and prosperous association.
“We hope this is the start of a long, happy and prosperous association between our organisation TM and Pick n Pay as they join our growing list of corporate partners,” Makamba said in a statement.
“The Premier Soccer League, has agreed to assist in any way necessary to ensure that this day and indeed the promotion, is a success.”
The PSL who have given the big game the nod have agreed to postpone all league matches which fall on the weekend of September 6 and 7.
The same weekend has been set aside by world soccer governing body Fifa for international games.
Organisers of the tournament have pegged the cheapest ticket at $1.
“TM and Pick n Pay is partnering with football in this initiative and to ensure that fans of the beautiful game get the chance to enjoy this event, we have agreed to peg the gate charges at US$1 for entry into the stadium and all children will be free,” said Makamba.
“The match will also act as the Grand Draw event for the TM Pick n Pay Big Brands Bargain Bonanza Promotion, a retail promotion that has been running at all TM and Pick n Pay stores nationwide and started on July 17 and will end on September 4.
“There will be branch draws at all TM and Pick n Pay branches on September 5, while at the National Sports Stadium the next day, a draw will be held for 17 Jeep Compasses and the grand prize of a Jeep
Cherokee.
“For the Jeep Cherokee, the winner will have to be at the stadium to win, while the other vehicles will be won by shoppers who would have participated in the promotion throughout this period.”Advertisement