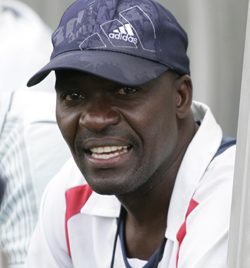 Caps United 1-0 Dynamos
Highlanders 2-3 FC Platinum
CAPS United’s Dominic Mukandi gave his team its first win in five years over city rivals Dynamos in a ZNA Charities semi-final match played at the National Sports Stadium on Sunday.
The sweet victory set up a final between the Green machine and FC Platinum who also triumphed over their hosts Highlanders in Bulawayo same afternoon.
Caps United are the defending champions of the competition having beaten another city side, Black Rhinos 2-0 in last year’s final at Rufaro.
FC Platinum beat Highlanders 3-2 at Barbourfields in the other semi-final with Allan Gahadzikwa’s double propelling Pure Platinum Play to yet another victory over their much fancied opponents.
Mitchelle Katsvairo scored the third for Platinum while Bosso got their goals from Ozias Zibande and Eric Mudzingwa.
This was Platinum’s second win over Bosso in a cup competition this season, having edged them 6-5 on penalties in the semi-finals of the Independence Trophy which they went on to win after beating Dynamos 3-0 in the final on April 18 in Harare.
At the National Sports Stadium, Caps United took advantage of a disjointed Dynamos to control the midfield with man of the match Tendai Samanja pulling the strings.
With the support of Moses Muchenje, Leonard Fiyado and Dominic Chungwa, Makepekepe overcame the Dynamos midfield and from one such sweeping move, they strung a number of passes which ended with Fiyado laying the ball for Mukandi.
Mukandi obliged by striking the ball first time with his outer foot from the edge of the box to beat his namesake Artwell Mukandi in the 37th minute.
After the break, Dynamos stand-in coach Philemon Mutyakureva brought in Washington Pakamisa and Cliff Sekete for Oscar Machapa and Walter Mukanga, but that did not alter the complexion of the match as they failed to convert the chances they created.
Dynamos team manager Richard Chihoro conceded the match had been lost in midfield.
“We failed to control the midfield. It was just a bad day in the office for us and we conceded a soft goal,” he said.
Caps coach Taurai Mangwiro was excited.
“This is the first time we have beaten them in five seasons and naturally I am happy and also this is the first time we have won two games in a row. I hope this gives the boys some confidence going into the next league match,” Mangwiro said.Advertisement