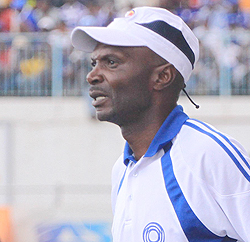 Tripple B 0-2 Dynamos; Highlanders 3-1 Black Rhinos
DYNAMOS picked up their first win of the season on Sunday after a battling victory over Tripple B at Mandava.
At Barbourfields in Bulawayo, Highlanders made light work of visiting Black Rhinos as they won 3-1 to stay second in the league on 13 points, two behind leaders FC Platinum.
The win moved Dynamos – who drew their first five matches – up to seventh with seven points.
Washington Pakamisa, formerly of CAPS United, scored his first goal in Dynamos colours in the 19th minute before Patson Jaure converted from an indirect free kick to give the defending champions maximum points.
This was the first time that Dynamos had scored more than a single goal in a league match in six attempts.

Callisto Pasuwa was a relieved man as he watched the defending league champions finally get their title defence on track.
“We were under pressure from the fans, but I’m happy that we finally won. We created a few chances in the second half but we did not convert,” Pasuwa reflected at the end.
What remains a source of worry for Dynamos in their strikers’ failure to score. Francisco Zekumbawira, who cost $15,000 from Hwange on a season’s loan, is still struggling with injury, while Boban Ziruntusa is yet to hit the mark.
Tawanda Muparati has been moved into an offensive position, but no goals are coming while Farai Mupasiri is out injured and the pair of Allan Tavarwisa and Patrick Khumbula are equally struggling.
At Barbourfields, it was one-way traffic for double scorer Beaven Chikaka as he netted in the 44th and 51st minute before Simon Munawa added the third in the 67th minute.
Wonder Kapita pulled one back for Rhinos 20 minutes from time but it was not enough to mount a comeback.
Hwange also came good on Sunday, edging Chicken Inn 2-1 at the Colliery while Shabanie Mine, in Luke Masomere’s second game in charge after the Asiagate scandal, lost 1-0 to Monomotapa with Kuda Musharu netting the all important goal in the 52nd minute.
Castle Lager Premier Soccer League Fixtures

How Mine vs Motor Action (Luveve), Buffaloes vs Black Rhinos