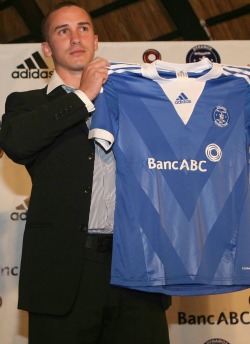 DYNAMOS and Highlanders have agreed a kit deal with global sports-wear and apparels supplier, Adidas, which is expected to help boost revenues at the country’s two biggest football clubs.
Under the terms of arrangement which was facilitated by the clubs’ sponsors BancABC, Adidas South Africa will supply replica shirts to be sold at selected shops and during games with the two clubs entitled to about 7 percent for each unit sold.
With each shirt set to retail at about US$50, the clubs can expect up to US$3.50 for each shirt sold.
The two clubs welcomed the partnership with Highlanders chairman, Peter Dube saying: “The sponsorship has made Highlanders a part of history and partnering Adidas will allow them to be among the best in the world.”
BancABC managing director Hashman Matemera said they opened negotiations with Adidas some time last year.
“Three years ago we started the journey of sponsoring Highlanders and Dynamos and one thing we worried was on our reputation at that time because all sponsors were concerned by associating themselves with the game that destroyed reputation,” he said.
“We were quite aware that it was going to be a bumpy road. We knew we were going to encounter turbulences, but we still believed in our vision and dream that one day we will get Dynamos and Highlanders at par with regional competitors like the top teams in South Africa.
Matemera said they had hoped to conclude the deal before the start of the current season but negotiations took longer than expected.
“Our aim had been to get the kits before the start of the season, but because of negotiations and logistics, it was not possible since the productions at Adidas had already started,” he said.
Adidas South Africa marketing chief, Adrian De Souza, said his company had been looking for an opportunity to be associated with Zimbabwean football.
“As we try to spread our market into Africa, in Zimbabwe we have identified Dynamos and Highlanders two of the biggest clubs and along with BancABC we hope to bring the clubs to world class standards,” he said.
“The process is not easy but we are proud to announce the new kits, home and away that will be used by the teams. The company is excited to partner with such strong Zimbabwean football brands with passionate fan bases.”Advertisement

The sale of replica shirts and related merchandise has become a key source of revenue for football clubs around the globe with the leading sides exploiting their world-wide appeals.
However, the fan bases of both Dynamos and Highlanders are largely limited to Zimbabwe but DeMbare chairman Kenny Mubaiwa was still confident the Adidas deal would help unlock the club’s value.
“We hope the partnership with Adidas will unlock the real value that our club has,” he said.
“From the sale of the jerseys, we will get a percentage into our coffers and we know this is not going to be easy, but we are determined.”
Club secretary, Webster Chikengezha said the club would likely open its own shops around the country to sell the shirts.
“I think we should try to buy directly from Adidas so that we get the seven percent entitled to us as well as the profits for the selling. We hope all will be well on the deal,” he said.