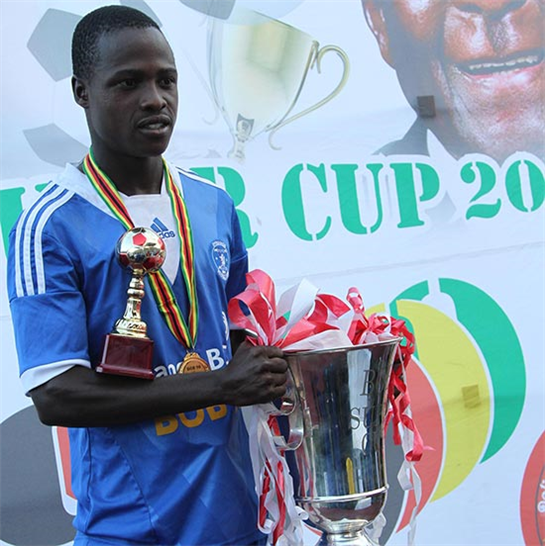 TEN-MAN Dynamos lifted Bob91 Super Cup after exerting revenge on bitter rivals Caps United in the final played at Rufaro Stadium on Sunday before a capacity crowd.
For their efforts, Dynamos took home $40 000 while Caps United are $30 000 richer. Highlanders, beaten by Caps, in the play off, were rewarded with $10 000.
Ronald Chitiyo, who was also named man of the match, struck the all-important winner in the 34th minute before Stephen Alimenda was sent off five minutes into the second half for a second bookable offence.
Caps had beaten Dynamos 6-5 on penalties in the Sino-Zim Cement Cup final two weeks ago and the defending league champions were desperate for revenge.
Sunday’s proceedings started with a combined march by Caps United and Dynamos against violence, but 15 minutes into the match, it was already raining missiles.
Dynamos fans pelted the referee Nomore Musundire over some of his decisions and there was a three minute stoppage when the Harare giants scored in the 34th minute as more missiles were thrown into the field of play.
Caps fans were also not happy when their star man Rodreck Mutuma was shown the yellow card after a scuffle with Augustine Mbara and three bottles were hurled into the pitch.
Chitiyo showed his intentions as early as the 11th minute when his volley flew over the bar. Mutuma was put through in the 20th minute but wasted his effort before Zvirekwi’s delivery into the box was cut off by the Dynamos defence.
With chances far and apart, it had to take a moment of brilliance from Chitiyo when he collected the ball on his right foot, pulled it to his left and let fly a screamer that beat Victor Twaliki, in goal for Caps United.
Dynamos fans, instead of savouring the goal, celebrated by throwing missiles into the field of play, forcing a delay.
Dynamos were down to 10 men, five minutes after the restart when Alimenda was shown a second yellow card for rough tackle on Godknows Mangani.
Dynamos fans threw more missiles after the red card.
Substitute Simba Nhivi, formerly Sithole, almost scored in added time, but had his effort cleared off the line by Caps defender Justice Jangano.Advertisement