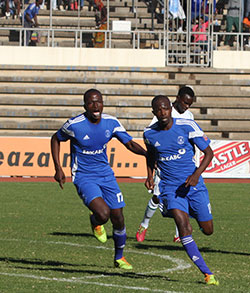 DYNAMOS have formerly lodged complaint with the Premier Soccer League (PSL) over the alleged abuse of their players by referee Darlington Shonhiwa during the derby against bitter rivals Caps United at the National Sports Stadium on Sunday.
PSL chief executive Kenny Ndebele, confirmed receiving the complaint from the defending champions.
The PSL boss however, said Dynamos skipper Murape Murape who is accusing the referee of verbal abuse erred when he reported the matter to the police after the match.
He said they had persuaded Dynamos to withdraw the police complaint.
“We have spoken with Dynamos to withdraw the case because there are relevant football governing bodies to deal with those issues.
“We need to follow proper channels in resolving football matters all the time,” he said adding that they had since submitted the complaint to Zifa whose referees committee will deal with the matter.
Murape, claimed the referee “verbally abused” him and other players at the end of the match.
The Harare derby ended in a 1-1 draw with Murape scoring for Dynamos before Malawian international Gerald Phiri came on as a second half substitute to equalise with a brilliant free kick.
“From the word go this referee was nasty towards us and I really don’t know why,” said Murape.
“This man was abusing us during the whole 90 minutes with very bad language. How do you expect me to respond and risk being sent off?
“It’s better for a referee to caution me than to insult me and my mother who is not even anywhere near the stadium. This guy was nasty towards us from the start.”