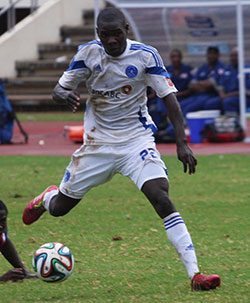 LOG leaders Dynamos make the trip to Ascot for a date with unpredictable premiership new boys Chapungu in a midweek Castle Lager Premiership tie on Thursday.
Dynamos go into the match with their confidence sky high following a 3-1 victory over Harare City at the National Sports Stadium on Sunday which saw them leaping to the top of the league table.
New find Anesu Gondo who signed from the now defunct Tripple B scored his first brace before substitute Walter Mukanga weighed in with third goal. Harare City scored a consolation goal through skipper Nathan Ziwini.
Gondo was given the nod ahead of strikers Farai Mupasiri and Patrick Khumbula who have been struggling to put the ball in the nets and he repaid his coach with the two goals to help Dynamos win their first match at home this season.
And as they prepare for the showdown against Chapungu Pasuwa believes Gondo is gaining confidence and will score more goals.
“We have been crying out for goals and am happy we are now getting the goals. Gondo is gradually gaining confidence. He is showing a lot of potential but I am worried about the way we are conceding goals. We are always conceding at the restart and we need to avoid that as we face Chapungu,” said Pasuwa.
Chapungu are on 10th position with five points. They are coming from a 2-0 defeat to Bantu Rovers and will be seeking to stop Dynamos from collecting maximum points in their backyard.
Meanwhile, the loss against Dynamos was Harare City’s fourth defeat of the campaign in four matches – a result that has added more pressure on coach Bigboy Mawiwi to start turning around the team as his men prepare for a showdown against army side Buffaloes at Rufaro Stadium tomorrow.
Elsewhere, Highlanders who drew 1-1 against Hwange at the weekend  have a fixture against Chicken Inn at Barbourfields Stadium on Thursday with Harare giants Caps United who lost 1-2 to FC Platinum on Saturday hosting Triangle at the National Sports Stadium hoping to recover from that reverse.
Fixtures
Wednesday: Chiredzi FC v How Mine (Chishamiso Stadium), Harare City v Buffaloes (Rufaro), Shabanie v Bantu Rovers (Maglas), ZPC Kariba v FC Platinum (Gwanzura).
Thursday: Hwange v Black Rhinos (Colliery), Caps v Triangle (NSS), Chapungu v Dynamos (Ascot), Chicken Inn v Highlanders (Barbourfields).Advertisement