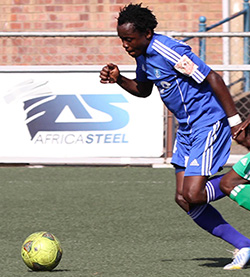 HOW Mine coach Luke Masomere has admitted he is interested in Dynamos midfielder Tawanda Muparati.
Muparati’s contract with the Harare giants expires on December 31 and he has apparently been spotted in Bulawayo, negotiating a deal with How Mine.
Masomere conceded that he has been monitoring Muparati’s game for a long time.
“Yes I want the player and I have admired him for a couple of seasons. There is no doubt he is a good player,” Masomere said.
“But for now I cannot sign him because he is still contracted to Dynamos. It would be very unprofessional for me to sign him at the moment.
“I will just wait and see what happens after the end of this year. But yes I want him.”

Keen to bring Tawanda Muparati to How Mine … Luke Masomere