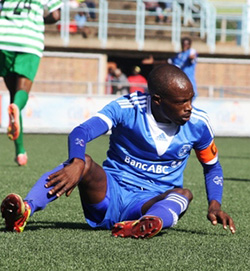 DYNAMOS captain Murape Murape says he will not be hanging boots anytime soon.
The veteran midfielder on Sunday lifted his sixth league title with Dynamos with the first coming in 1997 when he was still a schoolboy.
The 34-year-old expressed willingness to continue playing, saying retirement is out of his mind.
“I still have the energy to play. Playing at Dynamos however, depends on the new coach since Pasuwa is leaving,” Murape said.
“I have been at this club for a long time and I am delighted with the support the fans have always given me.
“They have inspired to keep me going and without them I would not be how I am right now.
“My teammates also deserve the credit for the hard work we have put in for the past seasons.”
His contract runs out next month and he has been linked with taking up the position of team manager at Dynamos.
This season he however, did not command a regular place in the team.