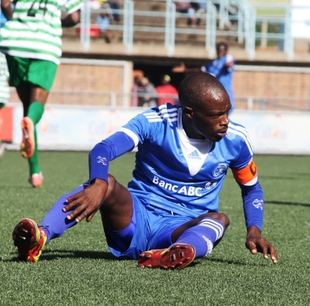 VETERAN Dynamos skipper Murape Murape could be sitting on the bench this Castle Premiership season as one of the assistant coaches at the league champions.
This was revealed by head coach David Mandigora’s number two Tonderayi Ndiraya on Friday when they unveiled five players they have signed so far for this season in Harare.
Mandigora took over from Kalisto Pasuwa, who opted not to renew his contract at the end of last season after winning his fourth consecutive league title. Mandigira is assisted by Ndiraya and Gift Muzadzi.
Murape, whose contract expired on December 31, could then step in as the second assistant coach as plans to lure Biggie Zuze from Triangle have gone up in smoke.
Said Ndiraya on Friday: “He (Murape) has served the club for a long time and we cannot just lose dedicated people like that.
“The coach met him on Wednesday and they will meet again when we begin pre-season training on Monday to map the way forward.
“But, for now, we are all agreed that he can give something to the club, as a player or in another capacity but like I said it’s him who will choose.”
Club chairman Keni Mubaiwa said if Zuze decides not to take up the offer on the table, then Murape could be an option.
“One of the options is to promote Murape Murape to the role, but that decision will be made by the technical team. They will guide us,” Mubaiwa said.
The players that were unveiled Friday are former Caps United forward Kelvin Bulaji, ex-DC Academy player Carlos Rusere, former ZPC Kariba goalkeeper Tonderai Mateyaunga, Nigel Gandari, a Dynamos junior, and Godknows Murwira who was signed from relegated Shabanie Mine.
Mateyaunga played second fiddle to Soccer Star of the Year first runner-up Tendai Hove last season and faces another hurdle to dislodge current Dynamos number one Artwell Mukandi.
Dynamos are also in the middle of negotiations with senior players-Rodreck Mutuma, Tafadzwa Rusike, Devon Chafa and Simba Sithole over the renewal of their contracts.
However, the club has stated they will not pay over the odds for them. This is after sponsors BancABC cut their funding by 43 percent as they now have four teams in the top-flight-Dynamos, Highlanders, Chapungu and the newly promoted Flame Lily.
The club’s tight financial situation has forced some exits among the playing staff.Advertisement