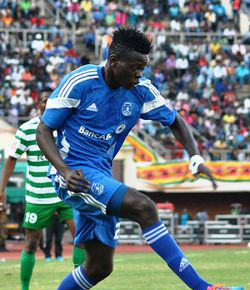 HARARE giants Dynamos have put five players including Evans ‘Earthquake’ Gwekwerere in a major reshuffle as the Glamour Boys battle to win the championship which they agonisingly lost to Chicken Inn last season.
Four other players put on free transfer include strikers Richard Kawondera, Farai Mupasiri, Walter Mukanga and defender Jimmy Dzingai.
Gwekwerere arrived at the Harare giants at the end of April amid a lot of hype following a recommendation by then Portuguese coach Paulo Jorge Silva.
But he has struggled to make it into the first team and, when he did, he came on as a substitute in the dying moments of the match.
Observers believe the former Dynamos hit-man, who had an explosive start to his career with the Glamour Boys and even attracted interest from South Africa where he had a stint with Moroka Swallows, was overweight and needed to work on his body to return to his best.
However, Lloyd Mutasa who took over from Silva, believes Gwekwerere now lacks the spark and the trademark predatory instincts he possessed when he exploded on the scene.
He agreed with the team management on Wednesday that the player was now excess to requirements at the club.
Mutasa has also asked Kawondera, Mupasiri, Mukanga and Dzingai to look for employment elsewhere.
“We met with the technical team and they have told us the players they want to offload.
“We have Jimmy Dzingai, Evans Gwekwerere, Farai Mupasiri, Richard Kawondera and Walter Mukanga,” said club treasurer Webster Marechera.
Dynamos are on the verge of sealing a deal with Denver Mukamba who has been training with them after also returning from South Africa where he was on the books of Bidvest Wits University. T
The Glamour Boys make the trip to Bulawayo to face Bulawayo City on Sunday.