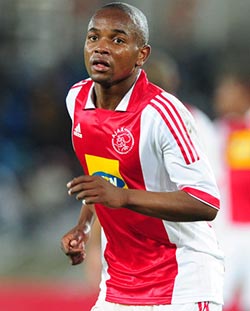 DYNAMOS secretary-general Webster Chikengezha believes the signing of midfielder Tafadzwa Rusike is a major boost in their arsenal for the Caf Champions League.
Rusike signed a one-year deal on Friday after agreeing terms four days earlier. This was after lengthy negotiations that began in July last year when the 24-year old briefly trained with the champion following his release by Ajax Cape Town.
With Rusike a full Zimbabwe international, Chikengezha feels Dynamos have a complete player to help their continental expedition.
“Tafadzwa has been in the national team for a long while now participating in crucial matches,” Chikengezha said.
2He has also played in South Africa. So there is no doubt he will bring experience to our team. We really need a player of his calibre in the Champions League. He is welcome to the Dynamos family.”
Rusike is a new addition to Dynamos together with former Triangle midfielder Walter Mukanga, ex-Buffaloes defender Themba Ndlovu and winger Ronald Chitiyo formerly of Monomotapa.
However, coach Callisto Pasuwa is still in search of a striker who should be registered with CAF by 15 January.
Dynamos began their pre-season last Thursday and on Sunday lost 2-0 to the Warriors in a practice match with their striker Simba Sithole grabbing a brace for the national team.
The Harare giants will be missing Pasuwa in the next few weeks as the coach is with the national team assisting Ian Gorowa.
Pasuwa’s assistants Philemon Mutyakureva and Tichaons Diya will take charge of the team.
Club vice-chairman David Mandigoro who coached the team to the Champions League in 2008 will be playing an advisory role in the absence of Pasuwa.Advertisement