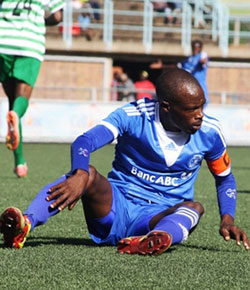 DEFENDING premiership champions Dynamos received a new Adidas kit Thursday at a function in Harare also attended by team patron and Minister of Postal and Courier Services Webster Shamu.
Club chairman Keni Mubaiwa and his board also attended the function together with players captain Murape Murape as well as Partson Jaure, Tawanda Muparati and Clive Kawinga.
Adidas Sports manager (South Africa) Bob Maphosa said: “Our first year partnership with Dynamos has been a rolling success for our company Adidas.
“Since coming into this partnership, I am delighted to say that our brand and football products have continued to take centre stage in the top Zimbabwean Premier League where we continue to dominate.
“We have enjoyed growth in the market and we have set a high standard for sports retailers in Zimbabwe. As a result, together with DeMbare, we will raise the standard of professional football even higher this season through consumer activation, promotions and competition initiatives.
“In addition to this, it confirms to us that Zimbabwe is indeed a place to invest in Africa. Undoubtedly we have also experienced challenges and learnt valuable lessons about business in this exciting environment as such our process, logistics and general understanding of the local consumer behaviour will vastly be improved going forward.
“This learning will benefit our consumer as we expand our stores to a further two stores by 2015. Today we would like to thank the government for the support. Dynamos supporters, BancABC and notably all the stakeholders.”

BancABC managing director Hashmon Matemera added: “When we started supporting Dynamos some four years ago, our objective was to transform, through Dynamos, the level and standards of soccer in Zimbabwe.
“We knew it was going to be a long journey and we knew we couldn’t do it on our own. So when we welcomed Adidas last year, we knew we were in the right direction.
“The partnership with Adidas has actually opened our eyes to the value of (working) with an international brand and we really appreciate what Adidas has done not only to us (BancABC) but to Dynamos as a team.
“When we see Dynamos properly kitted, we feel we are in the right direction. We also think that through our partnership with Adidas we should be able to do more to enhance the team’s financial position to enhance as well the image of football in the country.Advertisement