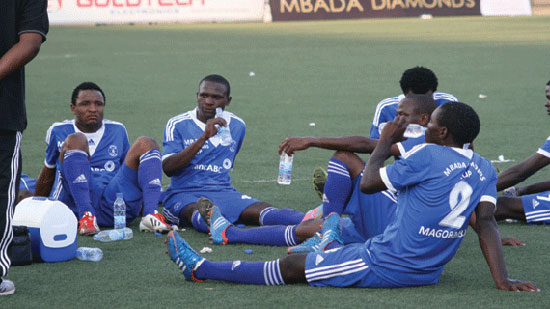 DYNAMOS have pulled out of the Caf Champions League after failing to secure sponsorship from their main backers BancABC.
The champions met with the sponsors on Thursday and were told, in very clear terms, that the bank is only committed to their domestic programme and that they will have to look elsewhere for funding if they want to take part in the continental tournament.
The Deadline for registration is Sunday November 30.
Said Dynamos chairman Keni Mubaiwa: “BancABC have said they have no money to give us and we don’t have the time to run around and source for funds.
“We cannot take part and we want to apologise to the players, the fans and Zimbabweans for this tough decision.”
Dynamos are Zimbabwe’s most successful club in African football after reaching the Champions League Final in 1998, and the semi-finals 10 years later. They also made it to the group stage in 1999 and 2010.
The Harare side clinched their fourth consecutive League title last weekend after finishing two points ahead of ZPC Kariba in a competition that was decided on the last day of action; the same day that coach Kalisto Pasuwa announced he will quit the Harare giants on December 31 when his contract expires.
Zifa spokesman Xolisani Gwesela said while they had not received official communication from Dynamos, indications are that Dynamos would not be participating in the Champions League.
“We have not received official communication from Dynamos, but we hope to get it today (Friday),” he said.
“But from the look of things, finances are a problem to everybody and everyone is affected. In the event, they are not able to take part; we will have to engage second placed-ZPC Kariba.
“And if the worst comes to the worst, there might be no Zimbabwean team in the Champions League next season if ZPC does not take up the offer.”
BancABC sponsors four teams in the Castle Premiership: Dynamos, Highlanders, Chapungu and newly promoted Flame Lily.
In the past, Dynamos have lured some of the best players in the land due to their annual participation in the Champions League and but they might now find it hard to retain some of their current talent.
Already Ronald Chitiyo, who is out of contract on December 31, is set for trials in South Africa and Europe together with Tafadzwa Rusike, who spent three seasons at Ajax Cape Town.Advertisement

Meanwhile, FC Platinum are expected to confirm their participation in the Caf Confederation Cup after winning the Chibuku Super Cup early this month.