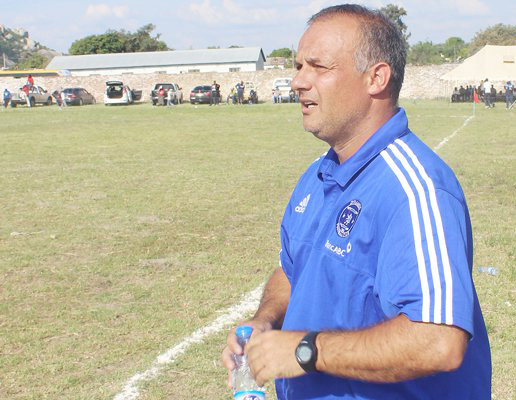 DYNAMOS have released a 26-man provisional squad for the 2016 season.
The squad has three slots reserved for senior players while one place is available to accommodate the fifth Under-20 player as mandated by the PSL.
Veteran forward Takesure Chinyama who is struggling with an injury is not on the provisional list together with Portuguese midfielder Carlos Branco who is believed to have returned to his native country.
Coach Paulo Jorge Silva’s strike force looks familiar, featuring mainly last season’s faces.
Kelvin Bulaji, Farai Mupasiri and Ralph Kawondera who struggled last term have made their way into this season’s team.
“My team is ready to face anyone this season. It is a process building a team and my players are starting to appreciate what I want,” Silva said.
“The players you see here are going to be champions and nothing is going to stop them from winning the championship. I respect other teams but we are going to be champions.
“I have seven million supporters behind my back. I was surprised to see our supporters already in Malawi when we went there. They deserve respect and we are going to give it to them on the pitch.”
Dynamos have however been far from being impressive this pre-season but Silva remains adamant of league success.
Dynamos provisional squad:
Goalkeepers: Tatenda Mukuruva, Tonderai Mateyaunga, Ashley Reyners.
Defenders: Elisha Muroiwa, Jimmy Dzingai, Obey Mwerahari, Augustine Mbara, Ocean Mushure, Godknows Murwira, Sydney Linyama.
Midfielders: Sydney Alimenda, Walter Mukanga, Tichaona Chipunza, Dominic Mukandi, Valentine Ndaba, Carlos Rusere, Masimba Mambare, Brian Amidu.
Strikers: Kelvin Bulaji, Roderick Mutuma, Farai Mupasiri, Ralp Kawondera
Juniors: Prince Makaha, Kudzanai Nyakasaka, Musa Madhiri, Kudzanai NasamaAdvertisement