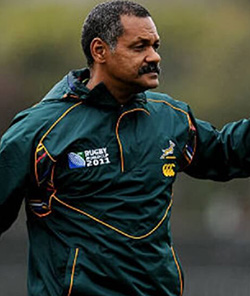 FORMER champions Dynamos have announced the capture of Caps United midfield workhorse Dominic Mukandi who crossed the great divide to join United’s bitter rivals.
The defensive midfielder has signed a three-year deal, according to club president Keni Mubaiwa.
Mukandi was one of the pillars of Caps United last season alongside Joel Ngodzo and it had been hoped he would extend his stay at the club.
This is their second major signing in the current transfer window after the capture of another midfielder Tichaona Chipunza who joined from Triangle.
“We signed Dominic sometime last week and we have also signed a goalkeeper from Triangle in addition to Tichaona (Chipunza).
“We are almost done with our transfers; we just need to add some two more players to the squad. We are looking at getting a central striker and a left winger,” Mubaiwa said.
Other reports are also suggesting that the club is in talks with former midfielder Archford Gutu who is back from Sweden where he has been based for the last couple of years.
Dynamos lost creative midfielder Ronald “Rooney” Chitiyo who joined rivals Harare City.
The Glamour Boys have also hired a Portuguese coach Paulo Jorge Silva as the club’s new coach replacing Tonderai Ndiraya.
Silva was introduced to the players on Monday as they began pre-season preparations.
He however, did not take part in the training as the club hierachy is still processing his work permit.
Mubaiwa said they had started the process of formalising Silva’s stay in the country and expected the procedure to be through before end of this week, after which a formal announcement would be made.
“He is already here, he arrived on Friday but we couldn’t unveil him before he can get his work permit. We have started the process and we are hoping to be done by Thursday,” Mubaiwa said.
Mubaiwa confirmed Silva will be assisted by former WhaWha coach Lloyd Mutasa, who makes a return to the club where he was fired five years ago.
Gift Muzadzi retains the goalkeepers’ coach post and so has team manager Richard Chihoro.
Silva is a normadic coach who has coached several clubs among them Germany’s VfB Stuttgart and Nuremberg, Portuguese giants Sporting Lisbon as well as African giants Esperance of Tunisia, Nigeria’s Enyimba and Ghana’s Hearts of Oak.Advertisement

Tonderai Ndiraya’s contract ended on December 31 last year and was not renewed.
He took over from David Mandigora in the middle of the season and went on to finish in second position last term, which was quite a good return, but that could not convince the demanding club hierarchy to extend his tenure.