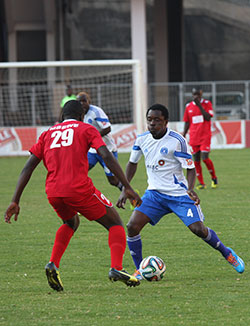 RODERICK Mutuma announced his return to Dynamos on Sunday with a first half goal that helped DeMbare sail to a 2-1 victory over visiting Black Rhinos.
Mutuma headed in Murape Murape’s cross 10 minutes into the match before Rhinos pulled back through Nesbert Padzarondera 18 minutes later.
Ocean Mushure sealed victory for Dynamos just a minute after the restart. With the win, Dynamos returned to second place after spending Saturday night a rung below as Rhinos fell down to second from the foot of the log.
Mutuma’s goal was off some sublime footwork by Murape who sensationally dribbled past Rhinos fullback Milton Kurehwa before posting a cross for the towering Mutuma to head home.
Rhinos tried to come back into the match minutes later with Lot Chungwa’s powerful header drawing a brilliant save from Dynamos goalkeeper Artwell Mukandi. It was not long before Padzarondera restored parity when he fired home a Jameson Mukombwe assist.
Under-pressure Mukandi nearly howled a back pass by his defender Themba Ndlovu in a move that was scary to DeMbare fans.
A few seconds, after the break, Mushure’s harmlessly-looking cross that found no taker freakly fooled Rhinos goalkeeper Jonathan Zvaita to nestle into the nets.
Determined Dynamos saw Devon Chafa’s long range crushing against the upright post six minutes after Mushure’s goal.
Four minutes later, Rhinos would have felt let down by Lincoln Samaraya after he failed to connect Philip Marufu’s low cross while unmarked inside the box.
The visitors kept on charging with Wonder Kapinda taking advantage of a Dynamos defensive lapse but shot over the bar.
Mutuma nearly grabbed a brace but his chip was cleared off the line by Obey Gada before Chungwa had a headed effort being denied by the cross bar with 14 minutes to go.
No meaningful raid was initiated by either side as the match ended 2-1 in DeMbare’s favour.