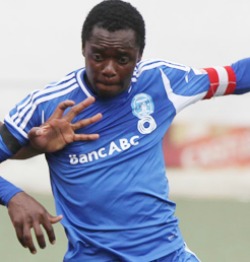 Motor Action 0-2 Dynamos
DYNAMOS moved into second place on the table after beating Motor Action 2-0 in a Castle Lager Premier Soccer League match at Rufaro on Saturday.
With the game looking to be headed for yet another draw, forward Clive Kawinga broke the deadlock to put Dynamos ahead in the 68th minute, before Tawanda Muparati’s beautiful strike six minutes later sealed victory for the defending champions.
It was Kawinga’s first goal of the season, while goalkeeper George Chigova kept his clean sheet in six straight games.
Following Wednesday’s goalless draw with Harare City, Dynamos struck the right chord to keep track of leaders Highlanders, whom they are now just a point behind.
But Highlanders have a chance to go four points clear of their arch enemies if they beat Black Mambas on Sunday.
Employing a makeshift defence, which included midfielder Stephen Alimenda, it was clear Dynamos were missing the injured central defensive pair of Partson Jaure and Gift Bello.
Motor Action dominated the early stages of the game in which they enjoyed control of the midfield but could not make meaningful raids.
The Bulls could feel hard done as they had two goals disallowed for offside. Muparati forced an acrobatic save from Motor Action goalie Marlon Jani with a well-taken free-kick in the first-half.
The victory saw Dynamos extending their wins over Motor Action to 12 since 2002, a period in which they have lost just four games – while seven of their matches have ended in draws.
DeMbare coach Kalisto Pasuwa said his charges had played to instructions and duly repeated the rewards.
“We were missing some players and I had to throw in youngsters like Abel Gwatidzo into the first line up but I am happy we collected the maximum points,” he said.
“We started very slowly and our central defenders were not communicating well but we managed to talk to them and the second half was better,” he said
Bulls coach Joey Antipas said Antipas his side had only themselves to blame for the defeat.
“We lost fair and square and I must hail Tawanda’s strike because any keeper in the world would have had problems with that one,” said Antipas.
Weekend Fixtures
Sunday: Highlanders vs Black Mambas (Barbourfields), Caps United vs FC Platinum (NSS), Buffaloes vs Shabanie Mine (Sakubva), Hwange vs Monomotapa (Colliery), Harare City vs Tripple B (Rufaro)Advertisement