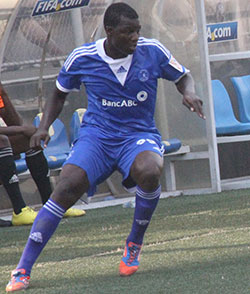 OCEAN Mushure was the hero after scoring the only goal that counted for Dynamos to see off a battling Tsholotsho in a Castle Lager Premier Soccer League match at Barbourfields Stadium on Saturday.
The Harare giants won a penalty six minutes into the match and Mushure accepted responsibility, beating the goal keeper for Dynamos to bag maximum points.
It was the visitors’ second win in seven matches of the campaign and Lloyd Mutasa’s first victory since he took over after the club parted ways with Portuguese coach Paulo Jorge Silva following a spate of dreadful results.
Mutasa had been given five matches to prove himself but started off with a 1-0 defeat to highflying FC Platinum at home.
However, with Saturdays victory over Tsholotsho, the Glamour Boys could be on course to bounce back and challenge for the championship after a miserable start to the campaign.
Crucially, the win will give Mutasa’s men confidence ahead of his remaining three matches that will shape his future.
Meanwhile bitter city rivals Caps United staged a dramatic come-back from behind to draw 2-2 against Sunday Chidzambwa’s ZPC Kariba at Rufaro.
And at Mandava, league leaders FC Platinum maintained their top position with a 3-0 demolition of basement side Border Strikers.
The big victory meant Norman Mapeza remains unbeaten in a league match since last year.
FC Platinum’s victory took their points tally to 19 in seven matches.