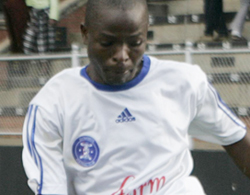 DYNAMOS will be seeking redemption when they meet army side Buffaloes in the quarter finals of the BancABC Super 8r Cup at Gibbo Stadium in Chiredzi on Sunday.
The champions were shocked 3-2 by the Mutare-based side at Sakubva in a league encounter two weeks back – their first defeat of the season.
But Dynamos, who have been boosted by the return from injury by key players defender Patson Jaure and striker Francesco Zekumbawire, are looking to make up for that defeat.
Team manager Richard Chihoro predicted a tough encounter. He said the BancABC Super 8r Cup was a different ball game and were looking forward to advance to the semi-finals of the tournament.
“This is a cup competition. It’s different from the league. The chances are 50-50. It does not follow that since they beat us at Sakubva they will do it again this time around. We have put behind us the defeat in the league. We are approaching this game like a completely different match. Everyone is ready for this game,” said Chihoro.
Buffaloes will on the other hand be seeking to prove that their victory was not a fluke and coach Timothy Masachi was confident of pulling off another shock result.
“Dynamos will obviously be looking for revenge but we are also looking to carry on from where we left. We don’t have any injury worries. All our players are available for this match,” said Masachi whose charges suffered a shock 2-4 defeat to Triple B in their recent league match.
Buffaloes’ inspirational captain Prosper Matizanadzo, who is also a member of the Warriors, will be expected to lead his troops.
Former DeMbare midfielder Wonder Sithole – scorer of one of the goals in their 3-2 victory over Kalisto Pasuwa’s men in the league – is also expected to play a key role with former How Mine striker Stephen Sibanda, scorer of a double in that famous victory, set to lead the attack.
Meanwhile, Motor Action will take to the field first against Monomotapa in one of the quarter final clashes set to kick off at 12.30PM with the Dynamos Buffaloes tie starting later at 3PM at the same venue.
Highlanders and FC Platinum also face off at Mucheke Stadium in one of the quarter final clashes on Saturday.Advertisement