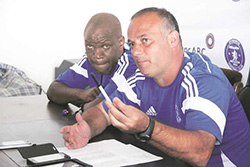 NEW Dynamos Portuguese coach Paulo George Silva says he wants to win the Championship and the African Champions League.
Speaking for the first time to reporters after he was given his work permit on Friday last week, Silva said his vision was to bring Dynamos back to where they belong –  top in Zimbabwe and in Africa.
Silva signed a three-year contract to lead Dynamos after the club parted ways with Tonderai Ndiraya who could only manage a second place finish in the league last term.
That performance was said to be not good enough for a club that had become used to winning the league every year having won the championship four successive seasons under Kalisto Pasuwa.
They eventually settled for the Portuguese trainer.
Silva said he was satisfied with the playing personnel at his disposal but revealed he would add at least two more players to the team from outside the country’s borders.
He declared he was a championship coach and was looking to win not only the domestic league title but the African Champions League.
“First of all, I want to tell you that Dynamos is a big club. It is already 53 or 54 years (old), if I am not mistaken,” he said.
“They have won the championship 20 times and in the past five years they have been champions. So I am here to win, I am champion coach and for Dynamos to be champions is my expectation.
“I am happy with the players, they are super. We are working with my players and my coach to be champions. Everyone wants to be champion.”
Silva said he did not want to just win the league title but for Dynamos to be champions of Africa.
“I don’t just want to win the league title but for Dynamos to be champions of Africa,” declared the Dynamos mentor.
He also said those players in the national team should know that they are the same as those that did not make it to the national team.
“As for my players in the national team, I saw them. They are ok but they should know they are the same with others here. They have to come and work hard and earn a place in the team.”
Dynamos, who had been used to winning the championship with former coach Pasuwa, finished in second position last term after they were beaten to the trophy by Chicken Inn.
Failure to win the championship prompted the Dynamos leadership to look for the man whom they believe could deliver the championship.Advertisement

Dynamos are beefing up their squad in preparation for the forthcoming season, with the signing of former Caps United midfielder Dominic Mukandi, Highlanders winger Valentine Ndaba, Triangle duo of midfielder Tichaona Chipunza and goalkeeper Ashley Reyners.
Silva said he was happy with the 29 players he had but revealed he would also add two more players before the start of the campaign.