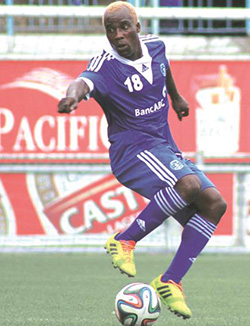 DYNAMOS’ title aspirations have been dealt another blow with combative midfielder Stephen Alimenda suspended for the big clash against Harare City on Sunday.
Alimenda – a key defensive midfielder for the defending champions – misses the clash against Harare City after accumulating three yellow cards.
According to the PSL, the veteran midfielder picked yellow cards in matches against ZPC Kariba, Wha Wha and Chicken Inn and is not eligible to play on Sunday.
Team manager Richard Chihoro said they would have to cope without the gritty midfielder.
“We have to cope without him. This is not the time for excuses but to reassert our authority. We have to win at all cost even without him,” said Chihoro.
Dynamos are third on the league table 45 points and trail log leaders Chicken Inn by five points and FC Platinum are second with the same number of points as DeMbare because of a superior goal difference.
Chicken Inn who lost 1-0 to Dynamos in their last league match at Barbourfields face struggling How Mine while FC Platinum face off Wha Wha.
Should Dynamos fail to beat Harare City, Chicken Inn and FC Platinum will emerge the major beneficiaries of that stumble.