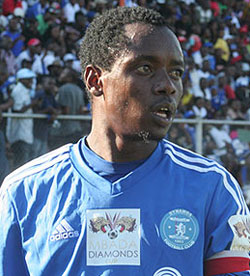 HOW Mine have signed 2013 Soccer Star of the Year and former Dynamos midfielder Tawanda Muparati on a two year deal.
This was confirmed by How Mine coach Luke Masomere on Monday, although the player, whose contract at Dynamos was not renewed when it ended on December 31, says he has not made up his mind.
“He is now my player. We agreed terms of contract and he signed last week. Of course, he has been linked with various clubs but he now belongs to Chikurupati,” Masomere said.
The news will come as a shock to Dynamos as secretary-general Webster Chikengezha said they were still negotiating with the 31-year-old.
Muparati is seen as the ideal replacement for the ageing Mernard Mupera, who is contemplating retirement before the start of the new Castle Premiership season in March.
Dynamos are set to announce their final squad on Wednesday with key players like Murape Murape, Thomas Magorimbo, Rodreck Mutuma, Simba Sithole, Devon Chafa, Russel Madamombe and Tafadzwa Rusike still to conclude contract extensions.
The league champions have already lost Themba Ndhlovu to Harare City while Ronald Chitiyo has moved to South Africa National First Division side Royal Eagles, formerly Sivutsa Stars.
Key at Dynamos this season is the issue of finances after sponsors BancABC cut their funding and the Harare giants turned their focus to junior and cheaper players.
One such player is Godknows Murwira (21), who signed for $6000 for two seasons from relegated Shabanie Mine, Obey Mwerahari (24), who also signed for two years from ZPC Kariba and 21 year old Kelvin Bulaji from Caps United.
New coach David Mandigora, who replaced Calisto Pasuwa, has a tough task ahead of him having been given a target of 30 points from 15 matches of the opening half of the season. Dynamos, who are missing out of the Champions League this season, want to return to Africa next year.Advertisement