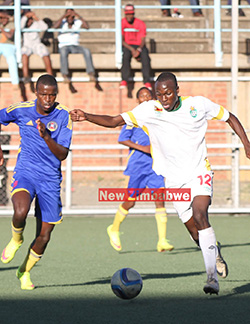 DYNAMOS defender Blessing Moyo and goalkeeper Tatenda Mukuruva have joined the Young Warriors camp as Zimbabwe prepares for the sink or swim Under-23 African Championships second leg qualifier against Swaziland on Sunday.
Kalisto Pasuwa’s men missing a number of key players including the Dynamos pair failed to beat Swaziland at home on Sunday, stuttering to a 0-0 draw which has left them with a mountain to climb ahead of the decisive fixture.
Dynamos have been refusing to release the players because the qualifiers fall outside the Fifa calendar for international matches.
But with the Dynamos management agreeing to release the players yesterday, it is certainly good news for Pasuwa as he negotiates the route to the Olympics in Brazil.
Hwange’ Pritchard Mpelele and FC Platinum’s Marshall Mudehwe who also missed the first leg while in South Africa for the COSAFA tournament, joined camp on Tuesday.
Team manager Shariff Mussa said: “Blessing Moyo and Tatenda Mukuruva have now joined camp.  We are now just waiting for Kuda Mahachi and Ronald Pfumbidzai.
“We are expecting Kuda tonight and Pfumbidzai should be in by tomorrow (Wednesday).”
Mahachi and Pfumbidzai did not play a part in the first leg. Mahachi was attending to his sick child while Pfumbidzai is on trials in Denmark.
In the event that Zimbabwe beat Swaziland they will face South Africa in the final qualifying round with winners from that encounter, booking a ticket to the finals in Senegal, from which the top-three finishers at that tournament will automatically qualify for the 2016 Olympic Games to be held in Brazil.
The fourth-placed team will engage a team from the Asian Football Confederation in a play-off.Advertisement