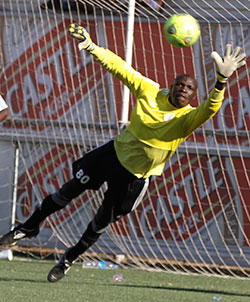 Dynamos 1-1 Shabanie Mine
DYNAMOS were held at home by bogey side Shabanie Mine on Wednesday allowing championship rivals Highlanders to go top of the table with two games remaining before the curtain comes down on the season.
DeMbare coach, Callisto Pasuwa, was disappointed with the 1-1 draw which saw his side drop into second place on the table with 50 points, the same as Harare City and one behind Highlanders.
The defending champions must now win their remaining two games, away to Chicken Inn and at home to Black Mambas and hope their rivals drop points in order to retain the championship.
“It’s becoming difficult for us to play at home now,” said Pasuwa.
“We missed many chances in this game and I have been talking to the guys about these last games. These are games of chances and we need to convert them. If you miss a chance you could be punished.”
The Harare side has found it tough against Shabanie this season after drawing the reverse league fixture 1-1. Shabanie also dumped DeMbare out of the BancABC Sup8r at the semi-final stage.
“Like in the previous cup game against Shabanie, we were leading 1-0 but they equalised and we tend to lack concentration in the dying minutes of these matches,” said Pasuwa.
Tichaona Mabvura gave Dynamos the lead in the 56th minute when, finishing off an attack initiated by midfielder Cliff Sekete and also involving Washington Pakamisa.
But Shabanie evened the score when Fungai Chirinda beat Dynamos goalkeeper George Chigova in the 73rd minute after some good work by Pervington Zimunya on the right.
Pasuwa lamented the impact of key injuries to key players but also questioned the application of those available for selection.