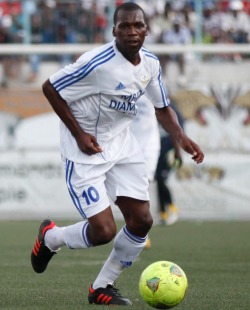 Dynamos 0-1 How Mine
DYNAMOS coach Kalisto Pasuwa was reportedly given a one-game ultimatum on Sunday night after the defending champions bombed out of the Mbada Diamonds Cup after a 1-0 loss to How Mine at Rufaro Stadium.
It has been a tough October for Pasuwa, who is yet to win this month after a 4-2 loss to Hwange at the Colliery and a 0-0 draw against Monomotapa at home last weekend.
This Wednesday, the defending champions travel to Mandava for a date with FC Platinum in the Castle Premiership race.
Dynamos had won the competition in 2011 and 2012 beating Motor Action and Monomotapa respectively and were looking at making it three in a row, but came unstuck in front of a sell -out crowd at Rufaro, pushed by the US$1 gate charge.
There was no immediate comment from the Dynamos camp after the match, but sources said after the departure of assistant coach Tonderayi Ndiraya, whom Pasuwa accused of meddling in team selection, the pressure was on the coach to prove himself.
Following Ndiraya’s departure, Richard Chihoro now doubles up as the team manager and assistant coach.
And Dynamos will now face a PSL fine after their irate fans rained missiles onto the field of play towards the end of the match.
This was the third meeting of the two clubs after Dynamos beat the then newcomers 3-0 in the reverse fixture in Harare before losing 1-0 at Luveve.
The much-heralded return of Simba Sithole for Dynamos from Supersport United was much ado about nothing as he was clearly rushed into the team as Pasuwa sought to finally come up with a winning formula to no avail.
It all seemed to be going Dynamos’ way as early as the 10th minute when How Mine goalkeeper Ephraim Mazarura was forced to save an Ocean Mushure shot from way out before Cliff Sekete shot over five minutes later.
Clive Kawinga and Tawanda Muparati had chances but blew them and by the half hour, How Mine were growing in confidence although Russel Madamombe tried to keep veteran defenders Herbert Dick and Gilbert Banda on the back foot.
Then the visitors struck! Thembani Masuku struck from inside the box with the help of the so-called star defender Patson Jaure in the 28th minute and for the next 62 minutes defended as if their very lives depended on it.Advertisement