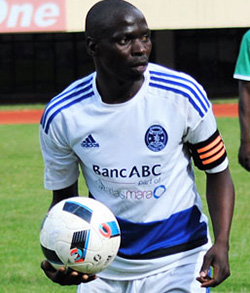 FORMER Zimbabwe Premier League champions Dynamos on Sunday take their quest for a first win of the new campaign to the Colliery for a clash against a Hwange team who have often proved stubborn opponents on home turf.
Dynamos have collected a single point from their opening two matches of the season and coach Lloyd Mutasa is aware any further slip ups could sour his relationship with the team’s demanding fans.
A 1-0 defeat at home to FC Platinum was followed up by what was perhaps an even more disappointing draw away to Triangle, with Dynamos allowing the opponent to come from two goals down and level matters late in the second-half.
Mutasa is however hoping that victories over fellow traditional heavyweights Highlanders and CAPS United in the Independence Cup over the Easter weekend will have boosted the confidence of his new look team.
Dynamos first beat CAPS United 1-0 last Sunday before piping Highlanders to the trophy after a 3-2 penalty shoot-out win two days later.
Mutasa’s team produced some genuinely competitive displays in both encounters, coming to within seconds of beating Highlanders in regulation time in the final on Tuesday only for the Bulawayo giants to equalise through a last minute spot-kick as the match ended 1-1.
“I am sure it will spur us on,” Mutasa told the media this week. “We beat two big teams in two days and you know what it means winning against your biggest rivals. Our battle now is to maintain that level of performances so that we don’t lose it in the league marathon.”
Mutasa will need to reorganise a defence which of late has developed a tendency to concede penalties in every match with Warriors defender Elisha Muroiwa the main culprit.