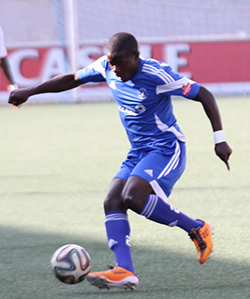 DYNAMOS who had threatened to boycott their Castle Lager Premiership tie against Flame Lilly at Larfarge Stadium on Saturday without three of their players who are on national duty with the Warriors have finally agreed to fulfil the fixture.
Striker Rodreck Mutuma, left-back Ocean Mushure and right-back Blessing Moyo are in camp with the Warriors ahead of the return of the African Nations Championships (Chan) tournament in Maseru at the weekend.
Dynamos had said they would not fulfil the match on Saturday since they had three players in camp with the national team.
The PSL had scheduled the match despite the fact that the Harare giants have three players in camp. League rules and regulations say if a club has three or more players on national duty their fixture can be rescheduled.
Dynamos president Kenni Mubaiwa had said his team would not fulfil the fixture against Flame Lily this weekend.
Head coach Tonderai Ndiraya and his assistants told the club leadership that playing on Saturday would be an advantage to them as they have another important cup final against Harare City the following Saturday.
Dynamos eventually agreed to fulfil the fixture as it would allow players who would have picked some injuries time to recover.
“We had refused to fulfil the fixture but our technical team advised us that it was important to play on Saturday against Flame Lily because it will allow our players time to rest and recover from injuries before the next match against Harare City in the Chibuku Super Cup final,” said Mubaiwa.
PSL chief executive Kenny Ndebele confirmed Dynamos had written a letter advising them that they would fulfil the fixture.
“I have received correspondence from Dynamos to the effect that they would be playing on Saturday,” said Ndebele.
With Moyo getting injured while training with the national team, it also meant Dynamos were left with only two players in camp with the Warriors.
Since Dynamos play Harare City in the Chibuku Super Cup final also on Saturday, a midweek fixture would mean the Harare giants would have limited time in their preparations for the match.
Log leaders Chicken Inn, FC Platinum and Highlanders who have three or more players each in the Warriors camp have asked PSL to reschedule their fixtures to Wednesday.Advertisement